Today is my stop for Amy George's blog tour for her latest release, The Sweetest Ruin. I'm so glad to have you visit this morning, Amy. Your post on marriage in Vegas was interesting. I knew of a few of the celebrity marriages that took place there but not all of them. I enjoyed reading about those and seeing your pictures. Thank you for sharing with me and my readers today. I wish you the best with your new release. The cover is awesome! Ellen, as always, did her magic. Readers, be sure to check out the giveaway at the end of the post!

Good morning, Janet, and thank you for hosting me at More Agreeably Engaged

for the blog tour for my newest release, “The Sweetest Ruin.” This story is a modernization
of Pride & Prejudice that has Darcy and Elizabeth finding love in Las Vegas, Nevada,
of all places!

More specifically, let's talk about celebrity marriages in Las Vegas, Nevada.
Quickie marriages became a thing in Las Vegas in the 1940's because there was no
waiting period or blood tests required. Because of this ease, many a couple have
chosen Vegas as their wedding destination. Sometimes they plan ahead, sometimes
they do not. (See Britney Spears' 55 hour marriage to some dude that was later annulled.) 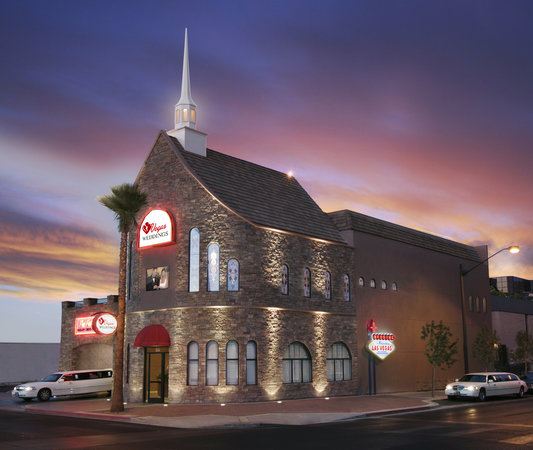 The first celebrity pairing of note is Mickey Rooney to Ava Gardner (!!!!!)
on January 10, 1942. It didn't last. Rooney married 7 more times and Gardner,
I assume, married somebody attractive down the road.
On May 28,1954, Kirk Douglas wed Ann Buydens at the Sahara. They are still married
and they gave the world Michael Douglas, so I'd say things worked out well for everybody. 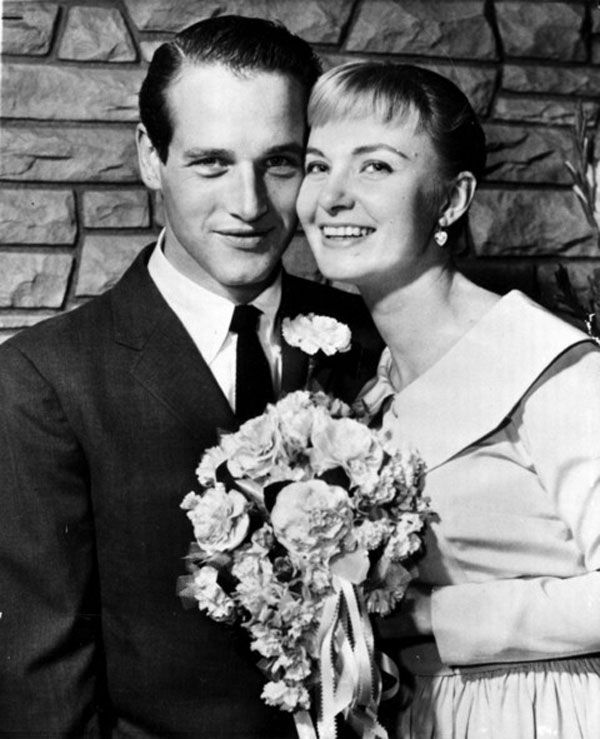 Movie stars Paul Newman (*sigh*) and Joanne Woodward were married
at the El Rancho hotel-casino on January 29, 1958. They were married
until his death in 2008. Said Newman of his professional collaborations with his wife:
"You should see us when we get back to the bedroom."  (*pant*)
National treasure and ardent animal lover Betty White married game-show host
Allen Ludden at the Sands hotel-casino in 1963. They remained married until Ludden's
death in 1981. Allen let Betty have as many animals as she wanted. I bet he'd have let
her have goats if she'd wanted them. I want goats. Mister George won't let me have
goats. Stupid Mr George. 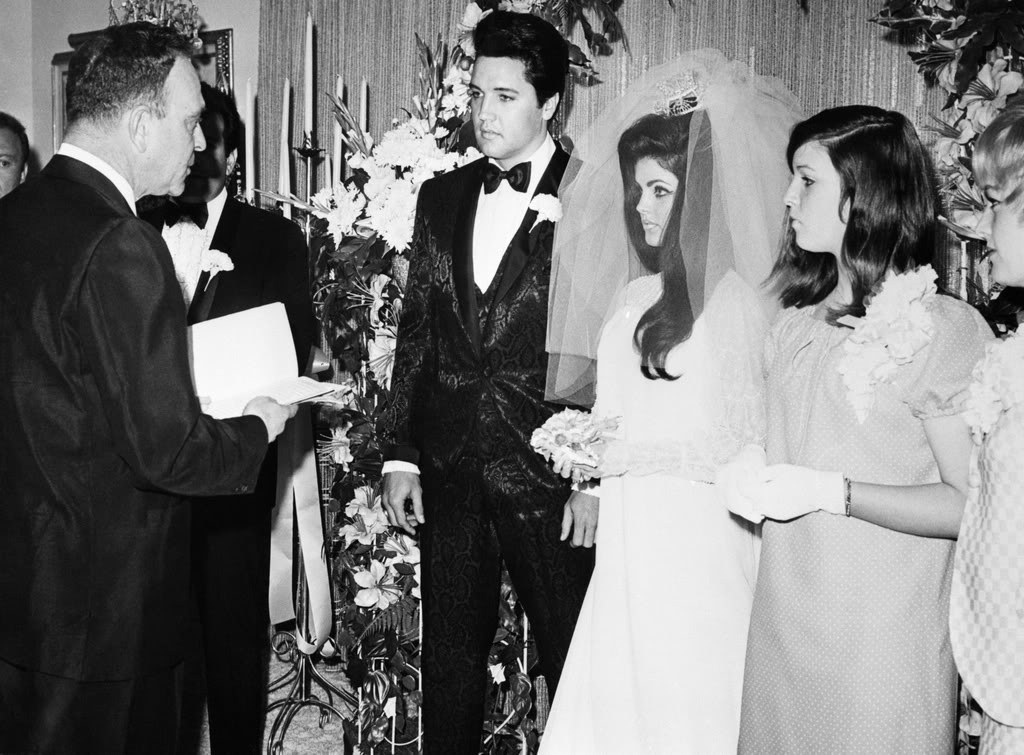 What is probably Vegas' most famous wedding took place on May 1, 1967 when Elvis Presley
married Priscilla Beaulieu at the Aladdin Hotel. Beaulieu had famously lived with Presley since
she was fourteen and they married when she was 21. It was the first marriage for both, though
it ended in divorce, and it produced Elvis' only [legitimate] child.On April 29, 1989, rock star, actor, and Superman enthusiast Jon Bon Jovi
married his high school sweetheart, Dorothea Hurley, at the Graceland Wedding Chapel.
They are still married. 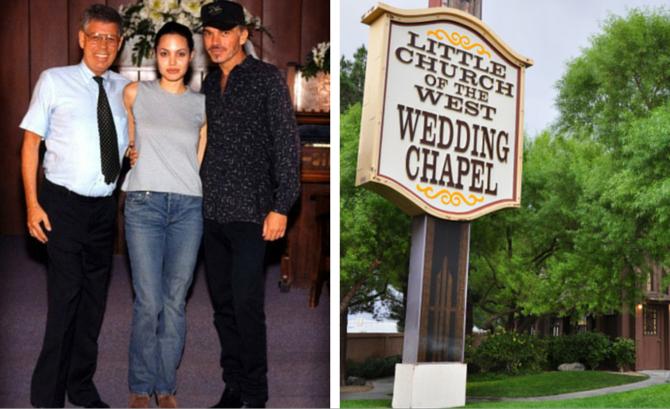 Having already doomed the union by having "Billy Bob" tattooed on her upper arm
(NEVER BREAK THE BOYFRIEND TATTOO OR SWEATER RULE, PEOPLE!),
Angelina Jolie wed Billy Bob Thornton in a 20-minute ceremony at the Little Church
of the West. The squicktastic couple (admit it, their PDA was SO gross) both wore
blue jeans for the ceremony that took place on May 5, 2000. The marriage,
the fifth for Thornton and second for Jolie, ended in divorce in 2003.
Other celebrities of note include Michael Jordan, Mary Tyler Moore, Frank Sinatra,
Tommy Lee & Pamela Anderson (the less I say about this the better), Ann-Margret,
and Corey Feldman (you should have expected that).Where do you stand? What's your favorite celebrity Vegas wedding?
Let me know on my Facebook page! https://www.facebook.com/authoramygeorge/ 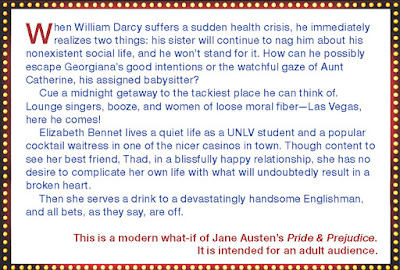 "Amy George is a middle-aged woman who got rid of her old lady/grown up and has since purchased an unreasonably small car. She refuses to listen to its radio at a reasonable volume, especially when the Beastie Boys or the Violent Femmes are playing. She lives in a small town in the Midwest where the bookstore and yarn shop are neighbors and most food is fried. Her household consists of a dog, a man, a hermit, and stubborn soap scum.

She has been writing since she was a child and ran the Hyacinth Gardens, a popular but defunct JAFF site."

Fun fact: My birthday is January 30th so this is like a big birthday party. 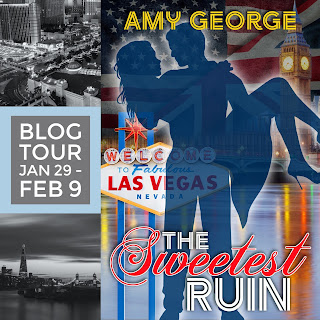 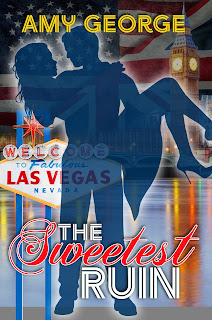 8 eBooks of The Sweetest Ruin are being given away by Meryton Press and the giveaway is open to international readers.
Terms and conditions:
Readers may enter the drawing by tweeting once each day and by commenting daily on a blog post or review that has a giveaway attached to this tour. Entrants must provide the name of the blog where they commented.

Thank you Claudine Pepe for your work in organizing the blog tour. Thanks to Meryton Press for the giveaway. Best wishes, Amy. Happy Belated Birthday!
Posted by Janet T at 10:28 AM