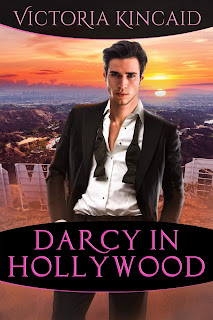 It's always good to have Victoria Kincaid visit and she's back this time with her latest release, Darcy in Hollywood. I'm glad we were finally able to get a date to work out for both of us, Victoria. :)

The blurb and excerpt have piqued my interest. It sounds like Darcy as an actor might have as much to learn as Darcy as a gentleman. Then there is George Wickham, always at the ready to stir things up a bit. Oh, I do need to find some time to read this one. Thank you, Victoria, for stopping by and sharing with my readers, plus having a giveaway.

Hi Janet and thank you for welcoming me back for a visit!  The scene below takes place early in Darcy in Hollywood after Darcy has nearly hit Elizabeth with his Ferrari (it’s their first meeting, not auspicious).  While dodging the car, she falls and hits her head.  He calls an ambulance so she can be evaluated for a concussion at the ER. I hope you enjoy it!

Rich and arrogant movie star, William Darcy, was a Hollywood heartthrob until a scandalous incident derailed his career.  Now he can only hope that Tom Bennet’s prestigious but low budget indie film will restore his reputation.  However, on the first day of filming, he nearly hits Bennet’s daughter, Elizabeth, with his Ferrari, and life will never be the same.  Okay, she’s a little sarcastic, but he’s certain she’s concealing a massive crush on him—and it’s growing harder to fight his own attraction….

Elizabeth Bennet has a lot on her plate.  She’s applying to medical school and running the studio’s charity project—while hoping her family won’t embarrass her too much.  Being Darcy’s on-set personal assistant is infuriating; he’s rude, proud, and difficult.  If there’s one thing she dislikes, it’s people who only think about themselves.  But then Elizabeth discovers Darcy has been doing a lot of thinking about her.

She might be willing to concede a mutual attraction, but events are conspiring against them and Darcy subject to constant public scrutiny.  Do Darcy and Elizabeth have any hope of achieving Hollywood’s elusive happy ending?