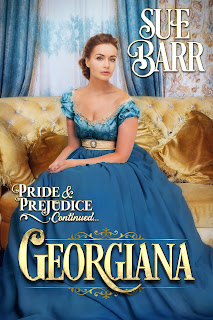 It is a pleasure to welcome Sue Barr back to More Agreeably Engaged. Sue has a new release, Georgiana, and is sharing an excerpt with us from her novel. Before we move on to the excerpt, take a look at the Book Description and the cover. Isn't the cover stunning. The colors are lovely.

BOOK DESCRIPTION
She longs for true love...
A dowry of thirty thousand pounds places a hefty weight upon the shoulders of Miss Georgiana Darcy. Her tender heart has been broken before by a cad who cared not one whit for who she was, but as a prize to be won, and she fears no man will ever see the worth of her heart.

Duty and honor...
These are the stalwart columns which hold up the life of Maxwell Kerr, Fifth Duke of Adborough. After rescuing Miss Darcy from an inescapable compromise, an offer of marriage is as natural to him as breathing air. When he discovers this is not the first compromise she has evaded, anger becomes his faithful companion and threatens their tenuous bonds of love and respect.

First and foremost, thank you for hosting me and sharing an excerpt from my latest release, GEORGIANA: Pride & Prejudice continued… Book Three. I’m sharing from near the beginning of the story to lay the foundation of what Georgiana’s family expects from her upcoming curtsy to the Queen and introduction to the social elite of London.

Before the week was out, the Darcy’s had arrived in London and were almost immediately beset upon by Lady Matlock and Colonel Fitzwilliam.

“Aunt Lucinda, Richard, you are here at an ungodly hour. We have only begun to break our fast.” Fitz stood and gave their aunt a kiss on the cheek.

Georgiana and Lizzy started to push away from the table to stand, but Lady Matlock waved them down. Richard called out a cheery ‘good morning’ and promptly attended the sideboard. Lady Matlock settled beside Georgiana and accepted a cup of tea from one of the footmen.

“To what do we owe the honor of your company so early, Aunt?” Fitz asked once he’d resumed his place at the table. “Richard, I know, came only to stuff his face with my food.”

He gave his cousin a mild glare as his cousin sat next to Lizzy after filling his plate to near overflowing. Richard’s reply was to raise an eyebrow and take a bite of his fresh baked roll.

“We have no time to waste,” Aunt Lucinda began. “Elizabeth and Georgiana’s presentations are but a scant eight weeks away. Not near enough time to accomplish everything I’d like. I have arranged several fittings at Etienne’s, for which I am eternally grateful to the Duchess of Adborough. Normally, Madame Etienne has a line weaving down the street for her services, but Margaret was able to exert her influence and hire her exclusively to attend all our girls.”

“Oh, yes. Margaret adores both of them and is determined to have them shine this upcoming Season.” Lady Matlock let out a satisfied sigh. “There are rumors the Prince Regent himself may attend in honor of Lord George’s loyalty to the Crown. I would not be surprised if he doesn’t bestow on George his own dukedom.”

Georgiana’s memory briefly touched on the near-scandal a few days before Nathan and Caroline’s wedding. Guests at Pemberley had been informed that a gun accidently discharged in the stables and Viscount Stanhope had been tragically killed. She knew that to be a falsehood as she’d overheard Fitzwilliam and Cousin Richard discussing Stanhope’s treachery.

“I hear the Barwick Duchy is vacant.” Richard volunteered the information around a mouthful of ham. “At least two hundred acres of valuable farmland and long-term tenants.”

“Yes, of course. And there are the secondary titles of Marquis of Glanworth and Viscount Mandeville.” Lady Matlock enthused.

“You are a veritable walking and talking volume of Debrett’s, dear aunt,” Fitz teased.

“You laugh now, Fitzwilliam, but when you and your lovely bride begin to move among London’s finest, you will be glad to know whom to avoid and whom to curry favor with,” she decreed with an elegant sniff. “If not for your sake, then for Georgiana’s. We expect her to make a splendid match this season. Already there are rumors the Marquis of Trevayne is on the hunt this year.”

“Dear God, Mama. You make it sound like he’s about to call the hounds.” Richard exclaimed. “Trevayne needs to find a wife, that’s a certainty, but he is not about to stalk the halls of Almack’s and pounce on innocent debutantes their first night out.”

“Be that as it may, I expect the foyer of Darcy house to be filled with flowers and cards when eligible gentlemen discover how beautiful my niece is.” Aunt Lucinda patted her niece’s hand.

Georgiana’s insides shrivelled at her aunt’s sentiments. Her aunt meant well. However, she knew, just knew, many eyes would be on her because she was a Darcy and because she was wealthy. Not for the first time she was grateful Elizabeth, Caroline and Catherine would be by her side the whole season.

“Mama would be in raptures if Kitty became a titled lady in her own right,” Lizzy said with a laugh. “She will be hard put to remain humble if that happens.”

“As soon as you are finished with breaking your fast, we shall meet the Duchess at Etienne’s. With six of us to outfit, she will need all hands-on deck.”

“Mother, where have you learned Navy terms?” Richard slathered more creamy butter on yet another roll. “Your second and most favored son is an army colonel” – Lady Matlock raised an elegant eyebrow – “one would assume you would use terminology more suited for land warfare.”

Lady Matlock waved a hand in Richard’s direction, as though shooing his concerns away from her thoughts. “I do know a few Admirals and Navy Captains, Richard. My social circle is quite wide, which you would know if you attended some functions with me.”

“Ah, but then you’d expect me to dance attendance on some fresh-faced chit of a girl and make polite talk with dewy eyed innocents.”

“Sorry, Mother. That was quite unchivalrous,” Richard apologized, casting a slight eyeroll in the direction of his cousin, Fitz.

“The prairie dust is in my blood but no longer on my shoes.” 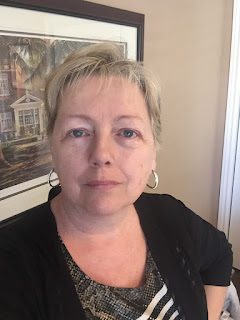 Sue Barr coined that phrase when once asked where she came from. Although it’s been over thirty-seven years since she called Saskatchewan home, her roots to that straight-lined province and childhood friends run deep. The only thing strong enough to entice her to pack up and leave was love. When a handsome Air Force pilot met this small-town girl, he swept her off her feet and they embarked on a fantastic adventure which found them settled in beautiful Southwestern Ontario when hubby retired from the military and began his second career as an airline pilot.

Sue started writing in 2009 and sold her first manuscript in 2010. For four years she was published under the pen name of Madison J. Edwards, and in 2014 began to write sweet contemporary romance under her own name. Always a reader of Regency romance, she discovered Jane Austen Fan Fiction through a childhood friend who writes under the name of Suzan Lauder. Almost immediately a question popped into her head, “Whatever happened to Caroline Bingley after her brother and Mr. Darcy became engaged to a Bennet sister?” and the “Pride & Prejudice Continued…” series was launched.

Sue is a member of Romance Writers of America and its satellite chapter, The Beau Monde. She is one course away from achieving her Professional Creative Writer’s certificate from the University of Western Ontario’s continuing study curriculum. In her spare time, she cans and preserves her own food, cooks almost everything from scratch and grows herbs to dehydrate and make into seasoning. Hubby has no complaints other than his trousers keep shrinking. At least that’s what he claims…. Oh, the kids and grandkids don’t mind this slight obsession either.

Be sure to check all the stops for the blog tour. I'm sure Sue will have lots of interesting posts and excerpts for us. 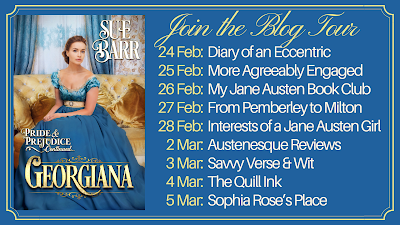 Thank you for stopping by on your blog tour, Sue. It was great to have you visit again. Thank you to Christina Boyd for organizing the blog tour.

I wish you much success with your new novel, Sue. It sounds really good, and the cover is so pretty. Thanks for the generous giveaway to all the visitors to the blog tour.
Posted by Janet T at 9:05 AM