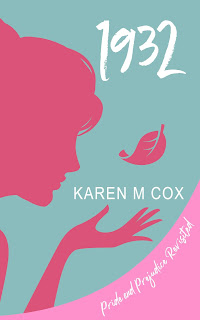 More Agreeably Engaged welcomes Karen M. Cox today. She is here to celebrate the 10th Anniversary Edition of 1932. Karen is sharing an excerpt from her book and has a giveaway. The excerpt is intriguing and the giveaway is generous. Enjoy!

Thank you for hosting me today at More Agreeably Engaged to celebrate the Tenth Anniversary Edition of 1932: Pride and Prejudice Revisited! I’m so excited about this re-release because there are several new scenes added, giving readers even more Elizabeth and Darcy time. Which is always a good thing, right?
For those who aren’t familiar with the story of 1932, it takes place in the US South during the Great Depression (you might have guessed that from the title.)
In this excerpt, Jane and Elizabeth Bennet have been at Netherfield for several days, sewing evening dresses for Caroline and Louisa Bingley (no Mr. Hurst in this story.) Mr. Darcy has become intrigued by Elizabeth Bennet and has ventured another visit to Netherfield before the sisters return to Longbourn…

Darcy strode by the hedge separating the driveway from the flower garden. He made a beeline for his roadster, halting in mid-step when he heard female voices. He froze in place, hoping he remained unseen. The last person he wanted to see him escaping was Caroline Bingley. The woman always made him squirm, like his tie was too tight. Louisa was less problematic; she actually seemed to realize she was too old for him. Caroline, though, was only a few years older than he—and for her, that meant he was fair game. In another life, he might have even considered her had she not been such a cold, detached shrew.
As the voices continued, he realized that they didn’t belong to the Bingley sisters but to the Bennet sisters. Now he froze for a completely different reason. He strained to hear their conversation, chastising himself for eavesdropping. As he listened, he realized, from their conversation, they hadn’t seen him at all.
“I sent a message to Uncle Ed this morning.” That was Jane’s voice. “He should be here around one o’clock tomorrow.”
Elizabeth sighed. “Oh, Jane.” He glanced around guiltily and closed his eyes. He was going to indulge himself in the sound of her voice, just this one last time. “I never thought I’d say this, but I’ll be glad to get back home.”
“It hasn’t been so bad, has it?”
“No, I suppose not so bad. Your charming friend Mr. Bingley is very kind and attentive.”
“He’s not my friend, really. Although he is charming.”
“But his aunts seem to want little company at all, except for Mr. Darcy. They certainly don’t seem to be very fond of us. I keep waiting for Miss Caroline to bark at me to serve her tea until I see poor sweet Nan appear. Boy, wouldn’t you hate to have that job?”
Jane giggled.
Elizabeth lowered her voice. “I tell you one thing I will miss, though.” Darcy leaned closer to the hedge, his hope rising. Might she say she would miss his company?
“What?”
“The bathtub.”
Darcy could hear the smile in her voice, and unexpectedly, he smiled too.
“I know the housekeeper must think I’m crazy. I’ve been in that tub every night—warm running water, lavender soap, soaking as long as I want.”
Darcy found himself visualizing the scene—sensations all but forgotten igniting his blood.
“It’s heavenly.” Elizabeth’s voice was as warm and fluid as the water in the tub.
He audibly swallowed.
“That crunched-up little metal tub in the kitchen at home just won’t be the same.”
Darcy’s eyes opened. Of course, old farmhouse, not lived in for years. No indoor plumbing. No bath. His hand reached up and touched the hedge. The wistfulness in her voice tugged some place deep inside him.
He remained still, letting the rest of their conversation wash over him. Jane and Elizabeth’s voices slowly moved away, leaving him alone beside the hedge. A cold, sharp wind kicked up, and he turned toward his car, feeling all the heaviness of the world in his bones.

*****
So, Mr. Darcy isn’t above eavesdropping on the woman who’s captured his attention. As fans of Pride and Prejudice, we’re all pretty sure he’s going to act on those feelings at some point. The question is…

“…do anything rather than marry without affection.”
—Pride and Prejudice

During the upheaval of the Great Depression, Elizabeth Bennet’s life is torn asunder. Her family’s relocation from the bustle of the big city to a quiet family farm has changed her future, and now, she must build a new life in rural Meryton, Kentucky.

William Darcy suffered family turmoil of his own, but he has settled into a peaceful life at Pemberley, the largest farm in the county. Single, rich, and seemingly content, he remains aloof—immune to any woman’s charms.

Until Elizabeth Bennet moves to town.

As Darcy begins to yearn for something he knows is missing, Elizabeth’s circumstances become more dire. Can the two put aside their pride and prejudices long enough to find their way to each other?

Winner of the Bronze Independent Publishers Book Award in Romance, 2011

Karen M Cox is an award-winning author of five novels accented with history and romance, a novella, and several short stories.
Karen was born in Everett WA, the daughter of a United States Air Force Officer. She had a nomadic childhood, with stints in North Dakota, Tennessee, and New York State before settling in her family’s home state of Kentucky at age eleven. She lives in a quiet town with her husband and works as a pediatric speech pathologist. 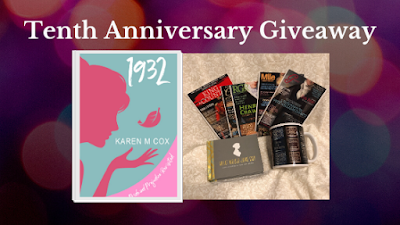 1932 Tenth Anniversary Edition Launch and Birthday Party
To celebrate the 10th anniversary edition of 1932, Karen is giving away
a signed copy of the book and some Jane Austen swag: fun notecards
from The Quill Ink, What Would Jane Do? book of quotes, and Austen
coffee mug (if US winner) or an ebook copy of the book and 25$
Amazon Gift Card (if International Winner - cause #shipping :) 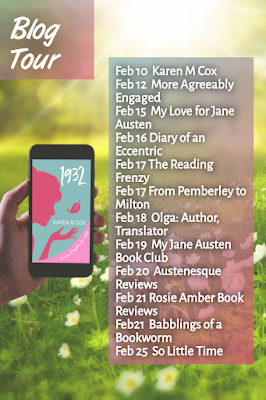 Oooh, I enjoyed that excerpt. Hmm, I wonder...will Elizabeth get running water and a new bath tub? My curiosity is raised. :)  Thank you for asking me to be a part of your tour, Karen. I wish you the best with your Tenth Anniversary Edition  of 1932.
Posted by Janet T at 12:41 AM