An interview with L.L. Diamond, author of An Unwavering Trust 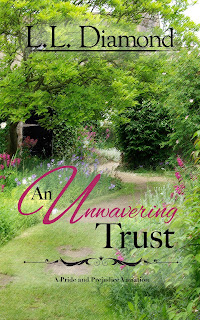 L. L. Diamond is visiting us today and I am happy to have her here. She graciously agreed to an interview and answered my questions with candor. She has allowed us some insight into her love of Austen and her methods of writing. Ms. Diamond's newest release is An Unwavering Trust. Although I have not had a chance to read the book yet, I have been hooked ever since I read the book blurb.  One lucky reader will get their own chance to read this novel as there is a giveaway, too.  Please join me in welcoming Leslie L. Diamond.

How and when did your interest in Jane Austen and Pride & Prejudice take root?

I was a student in college when Sense and Sensibility with Emma Thompson was released. When it came out on video (I’m trying not to date myself here!), my mother and I rented it. I can still hear her giggle behind me at the beginning as Fanny Dashwood wheedles her husband into giving his sisters nothing. I adored the movie, and she bought me the book, which ended up on a shelf for some time.
It was several years later that I found the 1995 Pride and Prejudice with Colin Firth and was hooked. I read Pride and Prejudice quickly, and found myself dreaming up the future of Darcy and Elizabeth in my head. For some reason, that story pulled me into Jane Austen further. Since then, I have read Sense and Sensibility, Emma, and Persuasion. I do hope to finish her writings one day, but while Persuasion runs a close second to Pride and Prejudice, none of them has captured my interest in the same way as Darcy and Elizabeth.

Persuasion runs a close second to Pride and Prejudice for me too. Darcy and Elizabeth captured my heart and I have to have my 'fix' every so often. I am so thrilled there are authors like you that help me with that 'fix'. What drove you to start writing your own books? Did you write other things before writing PnP variations?

I did not write prior to writing JAFF. My road to JAFF is similar to many stories I have heard. I devoured just about any story put before me, and eventually found myself in one of the forum chat rooms. I found a sisterhood of sorts and enjoyed spending my free time with these ladies and the occasional gent. Several authors were a part of the group and kept on me to try writing. I would laugh them off and tell them I was a reader, not a writer. I even tried to give away a plot idea, but one author wouldn’t have it. She told me to write it myself. Instead of writing that bunny, I wrote Rain and Retribution. Everything just sort of cascaded from there.

Since you did not write that bunny and wrote another book instead, do you have a muse that causes your story to lead you at times or do you use an outline and follow it religiously? What is your writing routine?

I rarely have a full outline that I use religiously. I usually start with a partial outline, but fill things in as they come to me. For some reason, I can never envision past a certain point. I have to begin writing and get a feel for the characters and where they’re going to continue the story. I do have one plot bunny that is very outlined, but even then, the outline is static and can always change. I’m playing with a story now that I have been writing by the seat of my pants. It all depends on what the muse latches on to honestly.

I am always fascinated when an author has a muse. Is there any setting that is more inspirational to you or your muse when writing?

I think it depends upon the story. I become enamored of something and I research and write it. Then, I become enamored of something else. With A Matter of Chance, I think a part of me missed home, so setting it in the south and revisiting antebellum homes and familiar themes was inspirational. With An Unwavering Trust, I became fascinated with Jane Austen and Bath. I am currently living in England and eager to go to Bath. I researched Jane Austen’s time there to include some of her opinions or activities into the story. I also ran across an article on an old estate in Oxfordshire called Aberlash house, and fell in love with it. I never knew that months later it would be bought by George Clooney. I suppose I was not the only one who became inspired by the setting!

Sounds like you and George Clooney have like tastes. That is neat. After researching Jane Austen's time, what about the Regency era became appealing to you?

My rational side knows that people probably smelled to high heaven and candle wax dripped on people during balls, but I don’t care. There’s something about the manners and propriety and falling in love that intrigues me. They wore gloves and so it was unusual for two people to touch skin to skin, so a touch that was skin to skin probably meant a lot more to someone from that time than now. I know I’m rambling, but there’s something that stirs my imagination in it.
Tell us something about your newest book that you love most. (if you can without giving anything away)
That is hard without giving anything away! I will say that I altered the story a lot from the beginning since it pre-dates canon, but I love that part of the catalyst for the ending was something from canon. That’s the best I can do without ruining it. Sorry!

No apology needed. We do not want you to ruin the story! What have you learned from writing that has helped you in your daily life?

Wow, that’s a tricky question. My children would probably say that now I equate any life lesson to Jane Austen or Pride and Prejudice. ;)  But, I would have to say patience. Writing and editing takes patience that I have not always possessed. Now, I am more willing to wait to see how something turns out rather than to rush.

Patience would be a good life lesson. I have found the same with my drawings. I cannot rush them. If I do, I ruin them. Is there anything special about yourself or your writing that you would be willing to share with us?

I had to think about this one for a while! One thing that has become a thing with my writing is to use a pet of mine somehow in the story. It began with A Matter of Chance and the dog Bear. My parents were divorced and I had a real Australian Shepherd named Bear at my father’s house. He had the same backstory as Lizzy’s Bear, but I will say that he lived a long and happy life until he died of old age.
In An Unwavering Trust, I used my horse Page. He was a huge sweetheart, and I miss riding him!

Animals are a special part of my life and I like that you put one of yours in your stories. That adds a personal touch. Now to other authors, do you have a modern day author that has inspired you? If yes, what was it about their writing that was an inspiration?

I love J.K. Rowling. She has a way of setting a scene and weaving a complex story that awes me. I cannot tell you how many times I have read the Harry Potter series and I don’t tire of it. I could read it again and still enjoy it as much as the first time I read it.

She is an amazing author. Her books and the movies made about them how captured the world. Now for a different but very important question, we all have our special reasons for loving Mr. Darcy, what are your reasons?

There are so many! I adore that he fell in love with Elizabeth Bennet despite the fact that she was not necessarily socially acceptable for him. I love that he abandoned society’s expectations by proposing to her at Hunsford (Even though the proposal was dreadful. Is it bad that I laugh when I read it?). I love that he took her censure of his behavior to heart—that he made a point to be a better person for her. He demonstrated how much he loved her with that simple action. I love that he saved her sister and wanted none of the credit. He intended to be a silent hero, not wanting recognition but wanting to be loved for himself. Mr. Darcy isn’t perfect, he definitely has flaws, but he is human and a good person who attempts to be better for love. Who wouldn’t want that?!

I cannot imagine any woman that wouldn't want that kind of man! :) You have given us a thoughtful and thorough answer...a good response with depth. Thank you for your reflections.

An Unwavering Trust may be found
on Amazon in both eBook and paperback. 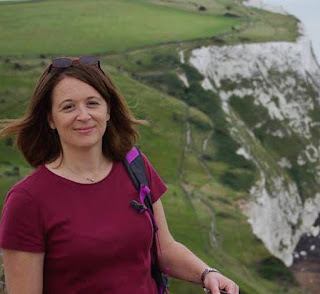 Thank you, L.L. Diamond, for visiting today and for cordially answering my questions. It is nice to get to know you a bit and learn of your writing process. The process for each author is something that always intrigues me...the muse, the setting and what makes the story come alive on the page.

I hope you have much success with An Unwavering Trust and appreciate you offering one for my readers. Ms. Diamond is giving away one eBook internationally to one lucky person. Please leave a comment below and include your email address to be entered in the giveaway. The giveaway ends at 11:59 P.M. on Wednesday, June 3, 2015. Good luck to all.
Posted by Janet T at 9:25 AM