Days of Future Past with Sally Smith O'Rourke 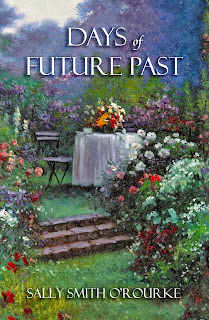 It has been quite some time since author, Sally Smith O'Rourke visited More Agreeably Engaged. I am so happy to have her visit again and share with us some things about her writing and her inspiration. Sally's latest release, Days of Future Past, has a different 'flavor' in that it is not an Austenesque novel. Ms. O'Rourke still admits to influence by Jane Austen as part of her motivation of certain inclusions in the book. I hope you will all have a chance to read this lovely and intriguing book. It bravely explores the territory of reincarnation and invites with descriptions so complete the reader is imported into the scene itself.

Please join me in welcoming back, Sally Smith O'Rourke.


Recently I sat on a panel with Shannon Winslow, Syrie James and Diana Birchal, all of us authors of Jane Austen related fiction. We began with each explaining what had inspired us to write Austenesque fiction. The journeys we took were diverse and intriguing. Jane and her characters were, of course the inspiration for all of us, we just reached her in different ways. The same is true for my general fiction, each story was motivated by different things.

Where do I get ideas is one of the most asked questions I get and has no easy answer. Often a documentary will trigger something that ultimately becomes a book, as examples, The Maidenstone Lighthouse and Christmas at Sea Pines Cottage both came about because of a television documentary on lighthouses. Since all lighthouses are very old, it only seemed logical that some would be haunted, so the ghostly lighthouse in Maidenstone was created. The documentary talked about people who rent or lease some of the lighthouses, and it made me wonder what kind of a person wants the solitude of life in a lighthouse and so Robert, a war hero and his beloved Golden Retriever, Meteor, became the stars of Christmas at Sea Pines Cottage (Meteor tells the story).

As for the Jane Austen books, The Man Who Loved Jane Austen and Yours Affectionately, Jane Austen came about after I read several Austen biographies. It was clear that no one had any idea who might have been the inspiration for Mr. Darcy of Pride and Prejudice. My late husband, Michael and I, created our own Mr. Darcy. A 21st century Virginia horseman who stumbles through a rip in the fabric of time and becomes Jane Austen’s inspiration for her Mr. Darcy.

I’m not sure anything inspired me to write Days of Future Past, my latest effort. I was taking a walk one day, out of the blue I wondered what could happen if one’s past lives invade the present. I have no idea from whence the thought came, but eventually the story began to evolve. It has turned into a story of love and loss, realization and forgiveness.

We all love the romantic relationships in Jane Austen’s books, but it’s the other relationships that she does so well that motivated me to include, in Days of Future Past, some relationships that enrich the story as well as help move it forward. As Austen did in Pride and Prejudice with Elizabeth and Charlotte Lucas, my protagonist, Ann has a best friend, Ellie Hart, someone in whom she can confide and find solace. Ted, my hero is a single father to Sara Jane, his sixteen year old, not entirely normal teenager. Inspired by Austen, I attempted to create a realistic atmosphere by including relationships that are not quite as critical but no less significant to the story. Ann has a particularly strong relationship with her Aunt and Uncle (her mother’s brother), Ted has a best friend and boss in the same person. Non-human relationships sometimes add humanity to a story, so I gave Ann a big white dog, Gigi, her friend and protector.

Another question that is fairly common is ‘how much of your writing is autobiographical?’ A lot! Not so much the big things, as I’ve never time traveled like Darcy in The Man Who Loved Jane Austen, nor have I ever lived in or near a lighthouse as in The Maidenstone Lighthouse and Christmas at Sea Pines Cottage and I have no idea if I’ve ever lived a previous life as Ted in Days of Future Past, but many of the small personal things are from my life or the lives of people I know. In Days of Future Past for example, Alex is a private pilot as was my late husband, Mike and we had a Gruman Tiger single engine plane just like Alex. Sewing is one of my hobbies, and Ann is considering turning Alex’s old office into a sewing room. I love to bake, as any of you who’ve visited my website know, as does Ann. In Days of Future Past Ann and Ted had planned their wedding in the carousel on the Santa Monica Pier, which is where Mike and I were married. I live near Pasadena, California and have experienced many earthquakes, which may be the reason I was able to describe the earthquake in Days of Future Past so vividly. Everything I write is part of me.

From time to time my writing has been described as ‘cinematic’ because, I’m told, readers often feel as though they have entered the scene. I suppose it’s how I describe things and I’ve often been asked how I do it. Unfortunately it isn’t a question I can answer with any clarity. I visualize a scene in my mind, the way I want it to play out and I write it. I try to make the descriptions clear enough that readers can see what I see. Does that make sense? I suppose it is simply my writing style, and I suspect there is no explanation for someone’s writing style.

For those of you who don’t know, Janet designed and executed the cover of the book. Beautiful, isn’t it? 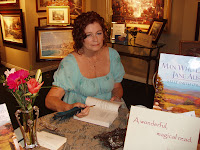 That I reside in the Victorian village of Monrovia, California; a mere two miles from my place of employment, a local hospital where I spend most daylight hours in the operating room as a scrub nurse.

That I am a native Californian having been born in Glendale, and spent most of my life here with a relatively short span of years in Reno, Nevada where I attended school. Returning after graduation I have remained in sunny SoCal.

That I was widowed some time ago. That I have very domestic hobbies like sewing, cooking, baking, candy making and cake decorating. Oh, yeah I write, too. Mike, my late husband and teacher, taught me that writing has to be treated like a job so every day no matter how tired I am I edit, research one or more projects and write.

That presently I am finishing up the continuation of The Man Who Loves Jane Austen with Yours Affectionately, Jane Austen. That I have started a story of reincarnation that takes place in Pasadena, CA and am making notes for a ghost story set in San Francisco. That all Three stories are running around in my head and often colliding but I untangle the debris and continue on.

There you have a few of my nothings.

Thank you, Sally, for being my guest and sharing these insights into your writing style. I found them of much interest. I always love hearing how individual authors are inspired to write and to learn more of their process. I hope you are having much success with this new book. It is one that I enjoyed reading very much.

Thank you also for the mention of my designing your book cover. It was such a pleasure working with you on it. The colors you selected are some of my very favorites plus the painting you chose for the front cover is soothing and inviting. If any of you are interested in the many photos used to create the back cover, take a look on my Cover Art page.

Sally Smith O'Rourke is having a fabulous giveaway! Doesn't that sound great! She is giving away one eBook edition of Days of Future Past, internationally, and one paperback edition, US mailing address required. Please leave a comment below to be entered in the giveaway. Also please let me know if you will be entering for the eBook or the paperback. Thank you for commenting and don't forget to include your email address for contact purposes should you be the winner. Without it you will not be entered. Giveaway ends at midnight May 19, 2015. Good luck to all and again, thank you, Sally, for being my guest. It is always such a pleasure to have you visit. Thank you also, for the generous giveaway. It is much appreciated.
Posted by Janet T at 1:45 PM