I have been looking forward to today's guest for several months now. When she originally contacted me in February about visiting More Agreeably Engaged, I was so excited. Then when I received a copy of her book, I was even more so. It is undoubtedly one of the prettiest books I have ever seen. It is in full color, inside and out. Yes, I did say the inside too. The blue print is so appropriate for the time and looks like fabric that might have been used then. Add to that the look of very old pages and you will see a delightful book that anyone would love to have in their library. (and one of you will)  :)

After deciding I wanted to write a book about the childhood of Jane Austen, the big challenge then became how to lucidly present the few – the very few! – facts that are generally agreed to be true about her formative years from birth to around age twelve.

It seemed most interesting to me to begin by creating a narrative based on these limited facts, and frame it through the emerging consciousness of a child. And once this narrative was written, I had twenty short chapters that together, I hoped, offered a fresh illumination of Austen’s early years and her development into a writer.

This narrative, a kind of hybrid between fiction and fact, forms the first section of the book. The second section is an annotated version of the narrative, which features brief quotations from various sources (including Austen’s books and correspondence), background details, ruminations on creativity, and connections to Austen’s work as a mature writer which I found intriguing — the underpinnings, so to speak, of the construction process.

The third section includes an overview of Austen’s life, legacy, and the era in which she lived, as well as a timeline of the key events on the which the narrative is based. 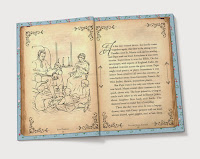 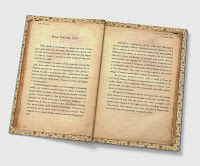 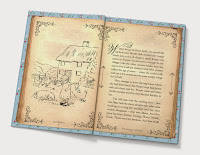 Finally, I knew I wanted illustrations to accompany the narrative. This was rather a leap creatively, as currently there exist only two identifiable images of Jane Austen; both of them show her as an adult, and in one her face is entirely shielded by her bonnet. Over the years, various Austen family members, friends, and acquaintances offered descriptions that today combine to create an idea of a tall, thin woman who had hazel eyes, a round face and a rosy complexion, high cheekbones, and curly brown hair.

It wasn’t much to go on when trying to conjure images of Jane as a little girl. But I wanted to provide a sense of, a feeling for, Austen and her era, and as long as I was completely transparent about this decision and process — and indeed, it’s all explained in Young Jane Austen — I felt very comfortable.

I had the great good fortune to partner with Massimo Mongiardo on the illustrations. Based in New York City, Massi’s done everything from book and product illustration to concept and character design for theater and film productions; it was great having him bring this diverse experience into the process. Too, he was very comfortable with the lack of definitive source material, which was a critical mindset in approaching this project!

In this post I want to focus on one illustration in particular, starting with the concept and showing how we began with the proverbial blank page and ended up with what I see as a wonderful representation of Jane in a very specific time and place.

This illustration is for the chapter called “The Dressing Room,” which occurs toward the end of the narrative section. It’s one of the most important illustrations in the book, as it needed to show how having a ‘room of her one’s own’ in a large and busy household may well have been a key development for a young writer-in-the-making.

Eleven-year-old Jane and her older sister Cassandra, fourteen, were given the use of the room next to theirs, which they called the “Dressing Room.” Biographers believe that Jane’s first literary efforts were written in the Dressing Room: the hilarious and astonishingly sophisticated work that’s now known as her Juvenilia. 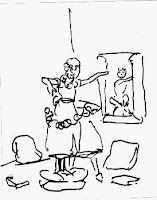 He noted in his email:

Cassy and Jane playing dress-up, maybe with flowers they've made of paper, books lying about, a mirror on the wall, pillows, a cozy, creative environment.

My initial reaction was really positive, but something tugged at me. And a few days later I emailed him back:

As much as I like your composition, I feel like we need instead to see Jane, alone, almost like she's gathering herself for what comes next — the transformation into A CREATOR. The solitude of the artist-to-be, etc. So that the illustration aligns with this text from the chapter: “Alone, but not lonely, for here you could think. Feel. Read. Figure things out. Dream.” Could we rethink this one? 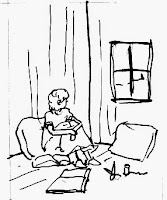 We agreed that we were heading in the right direction. Here’s what he sent next: 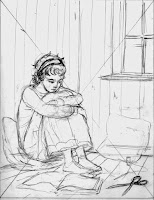 For this one I studied up on what Jane's portraits look like. This is the first chapter where her face is blatantly shown . . . as she's approaching an age where she might to start look like her adult self. Looking at it again I need to thin her eyebrows a bit to make her look less boyish. I wanted her expression to be one of foresight and deep thought. She's not happy but she's not upset. She's pondering . . . in the only place she can, the dressing room.

It was a huge shift from that initial sketch. We were getting so close to the feeling of this chapter!

One small concern: I showed the image to my husband who said, "Why is she wearing headphones?" I guess he doesn't know about the hairband thing . . . LOL. But you'll keep an eye on that as you proceed to final?

And here is Massi’s corrected image: 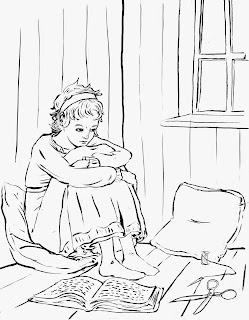 Notice the little hint of feminine eyelashes, as well as the subtle upward quirk of her lips so that she doesn’t look lonely or unhappy but rather, dreamy and determined instead.

A beautiful portrait of the artist, emerging. 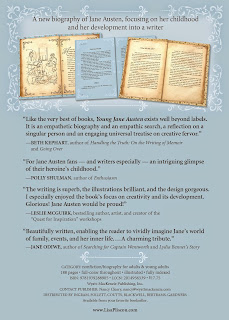 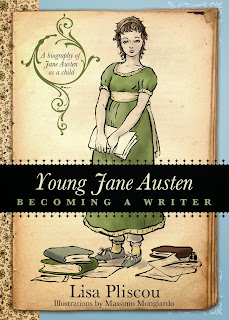 Available at Amazon
and B&N.

It has been such a pleasure to have Lisa Pliscou visit my blog and share the progress of the drawings for her book, Young Jane Austen: Becoming A Writer. Since I love to draw, it was of special interest to me. I also appreciated the emails from Lisa and her artist, as I have had similar ones with some of the authors whose covers I have done, especially the one when she had shown the image to her husband and received his thoughts. :) I hope all you readers have enjoyed this post as much as I have. Thank you, Lisa, for sharing it with us.

Lisa Pliscou is very generously giving away one signed paperback copy of her book to a lucky person. The giveaway is international. All of you will have a chance. Please leave me your email address in the comment so I will be able to reach you should you be the winner. If you do not leave an email, you will not be entered. You do not want to miss out on a chance of winning this gorgeous book. Thank you Lisa, for this giveaway opportunity for all my readers. The giveaway will end at midnight May 26, 2015. Good luck to all.
Posted by Janet T at 2:30 PM