Angel of the Centerfold...Michaela Robertson

A couple of weeks ago we were privileged with the cover reveal of Angel of the Centerfold, written by Michaela Robertson and published by Meryton Press. Today Michaela visits us as part of her blog tour.

I'm so happy to have you stop by, Ms. Robertson, and share an excerpt with us. Let's give a big welcome to Michaela Robertson! :)

On Friday, Chance sorted through the costume closet in his studio. This was a walk-in closet, larger than some city apartments and filled with various articles of clothing in an assortment of colors and sizes. One side was devoted to the props he used for his photo shoots: candles, feathers, costume jewelry, pasties… Everything he’d ever needed for a shoot was here, including some odd leather items he’d used for a layout for Bondage Babes a couple of years ago.

Each model was different in preferences and desires. Chance felt that he was doing them a favor by helping them fulfill their fantasies while feeding his more prurient interests. Some of the models had even taught him a thing or two. A couple of them had thought they were exclusive and permanent girlfriends, but he had quickly disabused them of that notion when he’d immediately shown them to the door. He felt perfectly justified in doing this. He’d told each model that he wasn’t boyfriend or marriage material, that all he wanted was fun and profit. They had each signed a contract explaining his stance and giving him the rights to all photographs.

Chance Bly’s studio was located on the upper two floors of a Federal-style building, the lower of which housed his offices, a digital media center, and a bedroom. The top floor was devoted to his studios. He also had exclusive use of the basement parking garage. All the other tenants and visitors parked in the garage across the street. He’d idly wondered whether the professional offices on the first two floors of the building knew what kind of establishment the upper floors harbored.

The top floor studio consisted of six large rooms set around an atrium. He used the atrium’s natural light to take pictures of his models au naturel with just “wilderness” surrounding them. His main studio room contained a queen-sized bed. It was a beautiful mahogany four-poster with a removable canopy. He had fond memories of this bed. Every three or four months, it was the setting for a night of passion and exotic pleasures with the current model.

Chance was convinced that this activity kept him from becoming attached to any of the soul-sucking debutantes that Callie thought he should marry. He’d watched as, one by one, his friends married the social elite—only to have the life drained out of them. He would never get caught in the marriage trap. Someday, when he finally decided it was time to settle down, he’d adopt his heir and hire a nanny. There were so many children who needed a parent and a good home. A debutante wife would leave their child with a nanny, and as a single father, he could do that just as well. He could have his heir and even a spare but absolutely not a wife.

His thoughts returned to the fact that Ariel would be in town tomorrow, and he had to continue readying the studio for a photo shoot. He’d already aired out each room, put clean linens on the bed in the main room, and checked the prop closet.

Sighing, he glanced at several camisoles and body stockings he’d selected. Nothing seemed right to clothe Ariel, the mermaid. Pushing the clothes out of the way, he laid on the bed. This had never been so difficult before. He’d always been able to find the exact combination of clothing and accessories to set the right mood and draw his model into his world.

Chance rubbed his eyes to alleviate the headache he could feel setting in. Ariel was a bit out of the norm for him. His usual model was blonde and waiflike, and she was definitely not a waif. When he held her while they were dancing, he could feel her curvy figure. She had a narrow waist, perky breasts—probably a B cup—and actual hips. She was an angel, a goddess.
He sat up suddenly and snapped his fingers. “That’s it! Perfect! A goddess, I shall dress her as a goddess.”

He went to his desk and started making plans. He made a list of new props to procure and browsed through the designer portfolios he’d received from his ad agency contact. Someone would certainly have outfits reminiscent of ancient Roman or Greek culture. That style was always in.

The leading lingerie designers willingly provided him samples. A month's worth of exposure on a beautiful woman in a men’s magazine was worth thousands of dollars in sales to a designer. Photos taken by a popular photographer who increased magazine sales were priceless. Chance Bly was a businessman, and he took full advantage of designers' samples.

His search was fruitful; he found half a dozen sets of lingerie that would be appropriate for a goddess, including Agent Provocateur’s “Gloria.” He wouldn’t try to get her into that for first time, but it would be perfect for the next session.

Picking up the phone, he called the ad executive who always arranged to acquire samples for him. The phone rang three times before the executive’s harried PA picked up. “Hello. Margaret Nelson’s office.”

“Hello. This is Chance Bly. Is Maggie available?” … Hello Maggie, Chance. I’m starting a new model, and I’m going for a goddess pinup. If I give you the list of what I’d like from the catalogue, can you get it for me this afternoon? … Yes, that quickly. I have my first meeting with the model tomorrow, and I’d like to get started with the sessions immediately. … Risqué wedding pictures of your daughter for your son-in-law-to-be? … All the rage, huh? I suppose you’re right; not every guy can brag that his wife’s picture was taken by a famous photographer. I’ve never taken those kinds of pictures before, but sure. … Is this afternoon too soon? You bring my samples, and I’ll take the pictures. You can look at the proofs right away, and I can have framed prints for you in a week. … See you at four.”

Hanging up the phone, he thought about Maggie’s odd request. If he had a daughter, there wasn’t a chance in hell he’d allow her to be photographed by somebody like Chance Bly.

Book Blurb:
Disguise of every sort creates difficulties for recent Yale grads Elizabeth and Jennie Blackwell, who are eager to begin the next chapter of their lives.

Elizabeth hopes her remarkable voice and academic training will help crown her the new darling of the Met. But will her burgeoning romance with world-renowned philanthropist Lliam Dafydd benefit her career or derail it before it begins?
Elizabeth’s minutes-older twin, Jennie, plans to translate her impressive résumé into a successful medical research program, but her demanding academic pursuits leave little time for romance.
Feeling trapped by her girl-next-door image, Jennie adopts a daring alter ego who behaves as she never would. As “Ariel De Mer,” Jennie becomes captivated by mysterious photographer, Chance Bly. Handsome and suave, he smoothly awakens her desires, while Ariel’s sexiness and sassiness mesmerize her smitten lover.
But Jennie’s innocent charade has a powerful impact on the lives of those she loves, and she is not the only one playing games.

Michaela Robertson has dabbled in writing since her teenage years. In college, she initially majored in music until deciding she'd rather eat than enrich the world with her talent. A few years later, with a still-damp business degree in hand, Michaela entered the world of statistics. As the author of many dry technical documents, her artistic side was hidden from the world. Only her husband and daughter were aware of the musical talent hidden beneath the surface.

In the late 1990's, she began traveling extensively for her job, and being away from home and family created something she was previously unfamiliar with—spare time. Bowling, mixed-doubles darts, and touring temporarily filled the void. A chance encounter in 2004 with the 1995 Pride and Prejudice mini-series starring Colin Firth and Jennifer Ehle led Michaela’s down a new path. Having read Fan Fiction in other genres, she went on a quest for Austen Fan Fiction and discovered a world rich in stories and history.
Music continues to be Michaela’s muse and has inspired her writing. Now a widow, she lives on a couple of acres on the edge of the world in the Pacific Northwest with the current love of her life, a border collie. 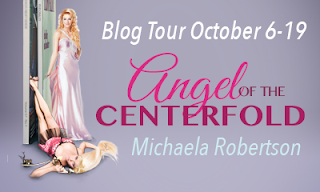 Thank you for sharing your excerpt with me and my readers, Michaela Robertson. It was great to have you stop by. Congratulations on the publication of your book and I hope to see much more from you in the future! Best Wishes!

Meryton Press and Michele Reed are offering a paperback copy of Angel of the Centerfold, open internationally, as the giveaway. Leave a comment below and be sure to include your contact info. The giveaway will end at 11:59 PM on the 23rd of October. Good luck to all!
Posted by Janet T at 11:54 AM