The Last Waltz with Pat Santarsiero

Happy Saturday to you, Dear Readers! I hope you have a great weekend. My guest today is giving away two boos so that should get you off to a good start!

I would like to welcome Pat Santarsiero back to More Agreeably Engaged. The last time she was here was November 2, 2013, after the release of Thursday's Child. Now she is here to tell us how her newest book, The Last Waltz, came into being. I am so glad to have to visit again, Ms. Santarsiero. It is a pleasure.


How and when did your interest in Jane Austen and Pride and Prejudice take root?

I became obsessed (a fortunate or unfortunate personality trait, depending on your point of view) with both Colin and Jane Austen, in that order.  Though I admit my motives at the time were not exactly literary, they did get me started down a certain path.  I soon had read every novel Jane had written and before I knew it, I was scouring P&P fanfiction websites for my weekly fix.  Eventually, I took the plunge and decided to write a story of my own.

Thursday’s Child was my first attempt at writing anything.  I never thought I had a talent for writing and had never even given it a thought.  But the idea of that story was so strong that I decided to give it a try. No one was more surprised than I was, when it was received so well.  Even then, I thought it was just a fluke.  I doubted that I would ever write another one, but here I am, telling you about my new book, The Last Waltz.

Do you have a muse that causes your story to lead you at times or do you use an outline and follow it religiously?

I have no outline, just a sketchy idea of how I want to start and how I want to end.  I have certain scenes pictured in my mind that I know I want to use.  I find inspiration in almost everything.  Music is one I rely on a lot.  If there is a song that makes me feel a certain emotion, I try to emulate that feeling in my writing.  One of the strangest places in which I found inspiration was a J. Peterman Catalogue!  So you never know what is going to trigger your imagination.  I really do try to get inside my characters’ heads and feel what they are feeling at the moment.  They tell me in which direction the story will go.

Tell us something about your newest book that you love the most.

It’s difficult to know where to start.  As with Thursday’s Child, The Last Waltz was a labor of love.  But I was lucky in one aspect as I believe the hardest thing about writing a new story is coming up with a good premise that you can build an interesting story around.  That difficult task was handed to me on a silver platter.  It started when I was first posting chapters of Thursday’s Child on a fanfiction website.  After each posting I would get dozens of comments.  After one particular chapter that had Caroline Bingley at her most despicable, comments flooded in as to how they would love to see me kill her off.  Suggestions ranged from being attacked by bees to an apoplectic fit.  When one reader suggested a FCA, I had no idea what it meant.  My commenters quickly informed me that it meant ‘freak carriage accident’.  I explained I had no FCA planned for Thursday’s Child, but would consider it for my next book.

So, naturally, I became obsessed with the idea and a FCA is the premise for The Last Waltz.  The possibilities seemed endless, but it was my own personal experiences and emotions that I was able to draw upon allowing me to give an authentic voice to my characters.  I can’t really say more without revealing too much of the storyline. But what I love most about this story is that I think every woman who reads it will be able to relate to this Elizabeth Bennet on some level.  We all have our own insecurities about ourselves, whether real or imagined, and this Elizabeth Bennet is no exception.  Whether she will learn to overcome them or allow them to dictate her life is the question.

I also like that I gave Mr. Bennet a fairly significant role in this story.  Since I killed him off at the very beginning of Thursday’s Child, I thought at least I owed him that much!

What have you learned from writing that has helped you in your daily life?

Well, first the most important thing that I learned from this whole experience is that you never know where life is going to take you.  When I think of how I got started on this journey (that would be my lusting after Colin Firth), it is almost unbelievable to me that it has led to my publishing two books.

What I’ve learned from my writing is that if you have the desire to do something, you should just take a chance and do it.  You might discover that you have a talent you didn’t even know you had.  Nothing ventured, nothing gained as they say. Whether you succeed or fail, you should never regret trying something new.  I have friends who have told me I have inspired them and I must admit that I am more confident in my own abilities since I have taken up writing.

Both books are available on Amazon
The Last Waltz
Thursday's Child 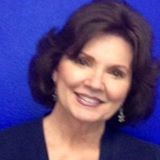 Well, I for one, am happy that you chose to write another book. It was good that the suggestions inspired you. I enjoyed Thursday's Child and found the premise believable because of the way you wrote the characters and story line. I look forward to reading The Last Waltz and seeing what you have in store for us this time. Thank you for answering these questions and for sharing your thoughts.

I also want to thank you for the giveaway. As I mentioned at the beginning of this post, Pat Santarsiero is giving away two copies of The Last Waltz. A domestic winner will have their choice of eBook or soft cover. An international winner will receive an eBook. To be entered, leave a comment and please include your contact info. The giveaway ends at 11:59 PM 16 October, 2015. Good luck to all.
Posted by Janet T at 12:48 AM