Joana Starnes and The Unthinkable Triangle

It is such a pleasure to welcome Joana Starnes to my blog today. I have been following her writing since her first book, From This Day Forward: The Darcy's of Pemberley, was published and she was a guest on my blog June 19, 2013 . It has been exciting to 'be along for the ride' with the release of each of her novels. I can honestly say, I have truly enjoyed each of them and can hardly wait to delve into this latest one, The Unthinkable Triangle. As I have mentioned before, Joana, you certainly know how to torture poor Mr. Darcy! You always give him his happily ever after but he definitely has to earn it! :)

I am so glad to have you visit again during your busy blog tour. Thank you for stopping by and for offering my readers a chance to win your new novel.


Many thanks, Janet, for having me as your guest today. It’s always a great pleasure to be at ‘More Agreeably Engaged’, especially as you were the very first to welcome me ever so warmly, when I started publishing my books.

My visit today is again part of a blog tour, this time for the launch of my latest novel, ‘The Unthinkable Triangle’, a story based on a love triangle between Elizabeth, Mr. Darcy and Colonel Fitzwilliam. Predictably, throughout a large part of the story, Mr. Darcy is caught between his all-consuming love for Elizabeth and his longstanding affection for his cousin and, with his ingrained sense of honour added to the mix, we can imagine the depth of his struggles.

I hope this is not really a spoiler, nor would it come as a great surprise to anyone that in the end he must receive his just reward, and the hand and heart of the woman he loves would compensate for all the sorrow.

As the plot twists and turns, it just so happens that they reach their understanding in the spring. It was not planned so, not as such, and it was largely by happy chance that they should come together at a time when, after the bleakness of a long, desolate winter, the world around them, just like Darcy’s own world, bursts back into life and bloom.

By happy coincidence again, I happened to visit Chatsworth in the spring, earlier this year. Perhaps now I should mention, with proper apologies to Matthew Macfadyen’s fans, that I did not go looking for Pemberley at Chatsworth, and that I write for a different Mr. Darcy. Nevertheless, it is at Chatsworth that I found some magical quiet corners that fitted so beautifully with my latest story.

In our writing, we are all influenced by what we find around us, and it is one of the greatest joys when, somewhere or other in this ‘green and pleasant land’, I come across a spot that reflects what I have imagined, or better still, provides small nuggets of inspiration for other scenes to come.

The place where Mr. Darcy and Elizabeth finally come to acknowledge their feelings for each other is not meant to be part of a grand estate, but of a fairly modest one, nothing like Chatsworth. Still, this is where I found open fields covered in spring blooms, and paths meandering under barren trees, and a very pretty little glade where a small temple stood, surrounded by daffodils.

I must say that the temple, although lovely, secluded and perfectly suited as the backdrop for the following excerpt, was in fact too modern for a Regency story. Not ‘a small Greek temple’ but Victorian in appearance, which is why I resorted to artistic licence and later had some fun with photo-shopping and moving temples up and down the country. In real life, this garden folly is at Cliveden, within sight of Windsor. But for the purpose of ‘The Unthinkable Triangle’, it stands in a small glade in the north of England and is about to shelter our favourite couple when, after months of secrecy and turmoil, Mr. Darcy begins to hope that he might have his heart’s desire at last.

“Come,” Darcy urged again and tucked her hand into the crook of his arm, their fingers still tightly interlaced, a poor substitute for the much greater closeness they both craved.

He led her out into the garden, then down the gravelled path that sneaked away from the house beneath tall pines and barren trees, through the wide expanse of fresh green dotted with daffodils. 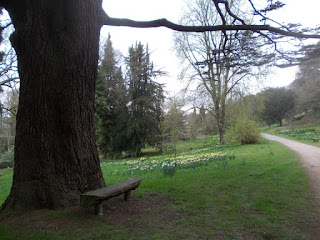 They did not stop to sit on any of the benches found along the way. There was no hope of privacy there either. Elizabeth could not care less where they were headed, nor that they soon must have their heart-wrenching conversation. She firmly pushed aside all thought of the dreaded future to savour this. The intimacy. The closeness. The certainty that he loved her. The feel of his warm hand clasping hers as though afraid that, should his hold slacken, she would vanish into thin air. Which was precisely what he felt: the most unsettling admixture of wild joy, tainted with the deepest fear that it might not last. […]

She looked down at her swishing skirts, blurred by yet another film of tears. She heard him sigh, and still would not turn to glance into his face, dreading the anguish she knew she would find there. Instead, she kept her eyes ahead, on the winding path that was now branching into another, a narrower one weaving its way through evergreens that made room here and there for leafless magnolias seemingly poised to burst into flower.

He led her down the new path and their further progress eventually revealed a garden folly shaped as a small Greek temple, which might well have been his intended destination. 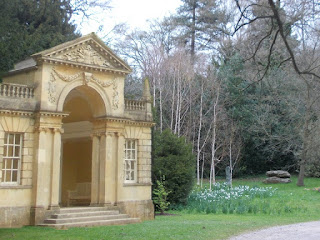 Doubtlessly they would be assured of privacy there, far from the house and screened by the curtain of greenery that was only opened on one side, into a little glade overgrown with daffodils.

A bench stood in the deep recess of the temple, yet neither chose to sit. Instead, in wordless accord, they turned to face each other and Elizabeth raised her eyes to his at last, to find not anguish, but a warm glow that was infinitely more affecting.

They came together without haste this time, without the rush of feeling that had pervaded their earlier kiss, but in joint recognition that this was where they had to be. In each other’s arms, his lips slowly exploring her face, inch by soft inch. The wide brow, smooth and cool under trailing ringlets. A closed eye. A cheekbone. A cheek growing steadily warmer with a creeping blush. The other cheek, where his lips lingered whispering endearments, before descending at an exquisitely unhurried pace to find her own. The corner of her mouth first, and he lingered there too as she waited, eyes closed and breathless, until she could wait no longer and turned her head a fraction, to fully yield her lips to his.

If you would like to know what sort of circumstances have conspired to influence Elizabeth’s decisions, please leave a comment to enter the giveaway of a Kindle copy, available internationally. The giveaway ends at 11:59 PM on 19th of October, 2015. Don't forget to include your contact info in the comment. Thanks for stopping by, best of luck in the giveaway and thanks again, Janet, for welcoming me here as your guest.

You can connect with Joana Starnes on:
http://www.joanastarnes.co.uk
http://www.facebook.com/joana.a.starnes
http://www.twitter.com/Joana_Starnes
Or visit ‘The Unthinkable Triangle Facebook page’ for details of giveaways and other images that have inspired this story.


Joana Starnes, it is always a such pleasure to have you as my guest and you are welcome anytime! I'm so happy to be a part of your blog tour and to have the chance to share with my readers this extremely enticing excerpt! Now I most assuredly cannot wait to start reading The Unthinkable Triangle. I have been anticipating it since I first heard it was 'in the making'! Thank you again for popping in and tantalizing us with this teaser!

If any of you want to read past posts on this blog by Joana Starnes, just click the links below.

From This Day Forward: The Darcy's of Pemberley
The Subsequent Proposal post
The Second Chance
The Falmouth Connection

Buy Link to All Books:

Dear readers, don't forget to comment to be entered in the giveaway for your chance to read more of this novel by Ms. Starnes. Good luck to all.
Posted by Janet T at 7:07 AM