Good morning, Dear Readers! We have a special treat today. Christina Boyd is visiting and is sharing her thoughts on Jan Hahn's new release, The Child. Her review will give you a taste of what will be coming during the blog tour for The Child, which starts on March 21st.

Thank you, Christina, and welcome to More Agreeably Engaged.

A Review: The Child by Jan Hahn

Accomplished author Jan Hahn’s latest Austenesque novel, The Child, beseeches “can love overcome all, even the prejudice against a child born to an archenemy?” She writes just the kind of tale that lures me in, consumes me. In Hahn’s stirring re-imagining of Jane Austen’s Pride & Prejudice, two years after Miss Elizabeth Bennet baldly refused his hand in marriage, Mr. Darcy beholds her from across a London street...with a young child in tow. A child! Whose child? But before he can approach her, he is called into the church: “I say, Darce, are you coming? ... The bride is waiting, Darcy!” Bride! Whose bride? Thus, within the first pages, I was addicted.

Years have changed Darcy and Elizabeth since that ill-conceived proposal at the Hunsford parsonage and each has their own cross to bear. Darcy learns that while he and Charles Bingley toured the continent to escape heartache, the Bennets of Longbourn have been embroiled in scandal—the Wickham affair. George Wickham, his boyhood friend, now foe, had eloped with a Bennet daughter, abandoning her with child. Hearing the rumors, all fingers point to Elizabeth as the unwed mother. Yet, when the Bennets’ horse throws a shoe and waylays their carriage on the road to Hertfordshire, Fate intervenes, once again propelling Darcy and Bingley into the company of Miss Jane Bennet and Elizabeth. Offering to deliver the ladies and “the child” home, Darcy cannot but observe the interaction between Miss Elizabeth and Baby Fan:
Naturally, Elizabeth tended to the little girl, I observed she was a most proficient mother. How tender her touch and her tone as she petted and soothed the little one! Just the kind of mother I had envisioned her to be. I remembered dreams of old that had contained a child of mine suckling at her breast. Long vanished now, man!

Back in the neighborhood, the gentlemen see with their own eyes how even the four and twenty families of Meryton have shunned the Bennets. Gossips declare that Wickham is the father and Darcy is tested like never before—guilt, resentment, and pride clash with his enduring, unrequited love and his need to somehow, some way, restore the Bennets’ honor. How could she not have heeded his warning and eloped with the blackguard, resulting in these shameful consequences? Told in the first-person narrative through Darcy’s eyes, the warring between his sense and sensibilities is honest and intimate.
Abruptly, she withdrew her hand from mine. I realized she could not bear the shame of my disapproval, for I represented society, the same society that condemned her and her family. Our hypocrisy be damned! Neither Elizabeth nor her sisters should suffer the degradation Wickham had inflicted upon them.

Darcy knows Bingley can never marry Jane Bennet as long as the child remains in the Bennet household—a constant reminder of their misfortune and fall from grace—and he takes it upon himself to find Wickham and convince him to claim the child (read: bribery). Alas, nothing ensues as Darcy expects and he must disguise these machinations—and his yearning—or risk losing all he has ever desired.
Immediately, I realized how I had exposed my feelings. What in blazes had I been thinking? That was the problem—I had not been thinking at all. I had been caught up in the pleasure of walking with Elizabeth and basking in the delicious scent that wafted over me when we inadvertently stepped too close to each other.

I first discovered the elegant writings of “JanH” in February 2007 on-line at Mrs. Darcy’s Story Site. I inhaled all she had published on the Web and when she was posting her “work-in-progress” (WIP) on Sunday evenings, Sunday became “JanH Night” in my house—and soon after the dishes were put away, I was on-line, reading her latest installment. In 2011, she began posting The Child; this WIP became my weekly high, my drug of choice. To my delight, seven years later, I find this tightened and edited version exceptional as anticipated, nay, as expected. Hahn’s absolute understanding of Austen’s characters, imaginative story, and adept research of the language and mores of Regency England create powerful imagery and emotive reading. I heartily recommend you read The Child sooner than later. But be warned, once you start it, you won’t be able to stop. You’ll find yourself at midnight swearing, “Just one more chapter. I can stop any time.” 5 stars. —Christina Boyd 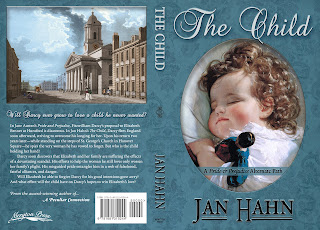 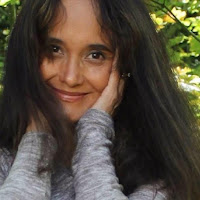 Christina Boyd wears many hats as she is an editor under her own banner, The Quill Ink, a contributor to Austenprose, and a commercial ceramicist. A life member of Jane Austen Society of North America, Christina lives in the wilds of the Pacific Northwest with her dear Mr. B, two busy teenagers, and a retriever named BiBi. She is the editor of anthologies The Darcy Monologues, Dangerous to Know: Jane Austen’s Rakes & Gentlemen Rogues, and another coming later in 2018. Visiting Jane Austen’s England was made possible by actor Henry Cavill when she won the Omaze experience to meet him in the spring of 2017 on the London Eye. True story. You can Google it. 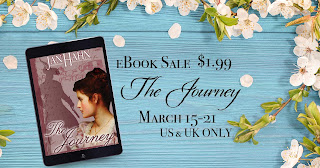 Jan Hahn's much loved eBook, The Journey, is on sale for $1.99. Thank you Meryton Press.

Christina, I want to say a special thanks to you for agreeing to visit my blog and post your thoughts on The Child by Jan Hahn. I loved everything you said about the book. It is such a good novel and I'm thrilled to see it published as well. It's been a privilege to have you share your review with me and my readers. I invite you to come back anytime. Thank you again.

If you haven't already purchased the eBook, you have a chance to win it here. I'm giving it away and the giveaway is international. Please leave a comment for a chance to win. The giveaway ends March 19th at 11:59 PM. Good luck to all.
Posted by Janet T at 2:03 PM