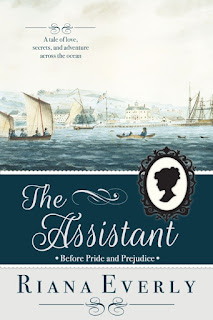 Riana Everly is back at More Agreeably Engaged for my stop on her blog tour for her latest release, The Assistant. I hope you will all give her a warm welcome. Riana is talking to us today about images and how important they are. An image can most definitely be worth a thousand words. It can say much with no words being spoken. I like this idea for your post and loved looking at all the pictures as you told us about them. Oooh, I do love a costume ball, too! How fun that you write to us about a Twelfth Night Ball! Take it away, Riana Everly!

Thank you, Janet, for hosting me on this stop on my blog tour for The Assistant. I’m thrilled to be here today to talk a bit about my new release. Since I know Janet is an artist, I thought I would delve into images as much as text, because, as they say, a picture is worth a thousand words. And what is more colourful – in every sense of the word – than a costume ball? I hope you enjoy the sights.

During the Regency period in England, and indeed for years before and after, costume balls were very popular, and especially so for Twelfth Night festivities. In fact, Shakespeare’s play Twelfth Night is really just about dressing up gone wrong! Some fancy dress balls were unmasked, but others were designed to have the guests in disguise, to make a game of trying to discern who, exactly, was who!

Since my hero, Edward Gardiner, meets an enchanting lady at such a Twelfth Night ball, I thought I would take a quick look at what sorts of costumes might have been worn at such an event. 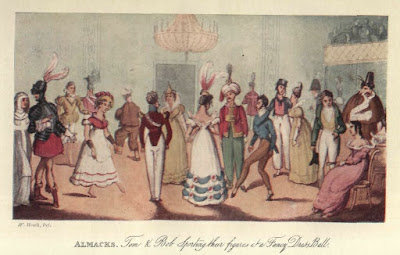 In this image (image: Costume Ball), you can see a nun, a knight in partial armour with a plume in his helmet, a chap in Elizabethan garb, a shepherdess, a fellow in a Persian costume with a turban and a grand feather, and a Puritan, among other costumes. 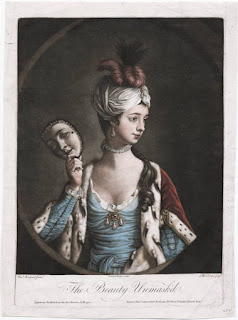 Here (image: Beauty Unmasked) is a drawing from the 1770s, showing a young woman with a turban and mask ready to meet the evening incognito!

Historical costumes were popular, from Ancient Greece to pre-Revolutionary France. Edward’s friend Frederick is disguised as Louis XIV at his mother’s ball.  Characters from mythology were also popular costumes, and Frederick’s eye is on a young woman dressed as a Greek goddess. This image (image: Ancient Greece) is from the Victorian era, but Miss Lancaster’s costume would have been similar, with the addition of a disguising helmet and mask! 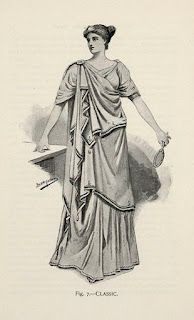 Also popular were characters from the Commedia dell’arte and other Venetian-inspired costumes. Edward attended in the guise of the Duke Orsino from Twelfth Night, but with an elaborate Italianate mask (image: Carnival half-mask). 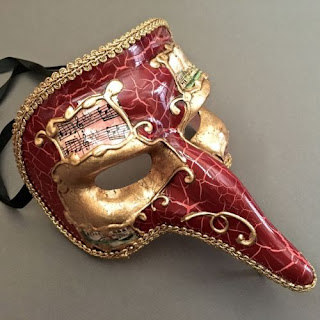 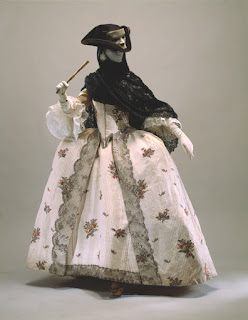 Ethnic costumes (or rather, those loosely inspired by exotic lands) were also very popular. In the July, 1807 edition of Le Beau Monde, there is a drawing of an Egyptian costume with the following description: (image: Beau Monde 1807 Egyptian) 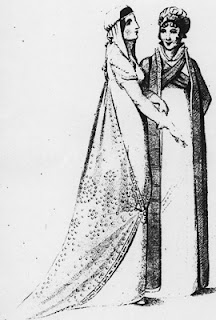 “The head-dress is composed of a rich handkerchief of white lace, which crosses the back part of the head; each corner of the handkerchief, a small distance from the shoulder, falls on the front of the neck; the handkerchief is trimmed round with a magnificent border of peals, and each corner is finished with a bunch of the same; the hair is curled on the top of the forehead with small thick curls, separated with a band of diamonds, which crosses the forehead, and continues round the head; two small curls down the side of the face. A rich white figured sarsnet dress made with a short train, and scollope back; sleeves very short and covered with a broad flap of white lace; the undersleeve is trimmed round with small French pearls; also the lace, which is fastened to the back part of the sarsnet sleeve with a star of pearls; the front is made full each way, and covered with rich lace fastened in the centre with a star to correspond with the sleeves. An Egyptian train of lilac spider net, showered with pearls, and worked in the centre with a large star of the same, cut in the form of a half handkerchief, wider a one end than at the other; one end is cut square, and gathered up full on the left shoulder with a pearl star; a piece of sarsnet, from under the left arm, richly ornamented, crosses the front, and is fastened with the middle corner of the train to the right knee with a bunch of pearls; the other corner, which reaches to the bottom of the dress, is finished with a large pearl tassel; the dress and train are trimmed round with pearls to correspond. White kid gloves and shoes.” 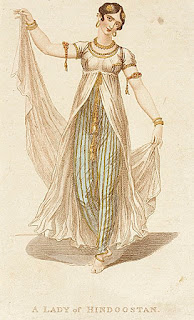 Likewise, Chinese, Persian and Indian-inspired costumes were the rage. This 1809 drawing (image: Beau Monde 1809 Hindoostan) shows “A Lady of Hindoostan” wearing a pair of loose trousers as part of her costume. In The Assistant, Edward meets a young woman attired as an Indian Princess, complete with feathered turban and face mask. Fortunately for her disguise, turbans were generally in fashion at the turn of the century, and she needn’t have looked very far for hers! (March 1796 Detail) 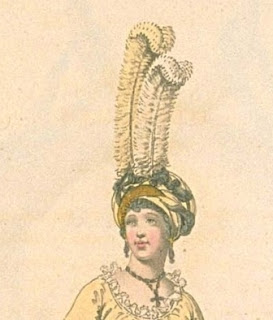 I hope you’ve enjoyed seeing just a few of the sights at the ball. Here is an excerpt from the story.

The ballroom was becoming rather full by the time the two friends braved its crowds. Frederick pushed through the gathering masses of costumed guests, past princesses and Oriental magistrates and bejewelled doges and glittering fairies, eventually leading Edward to the far corner of the vast space. There, near an ornate marble pillar, stood two masked women. One, dressed in the guise of a Roman goddess, looked up expectantly as Frederick approached. The helmet on her head and her glittering shield proclaimed her to be Athena, goddess of war and wisdom, but the attitude of expectation in which she held herself bespoke more of Venus, goddess of love. If her expression was a guide to her inclinations, she was not averse to Frederick’s attentions.

“Mr. Dyson,” she proclaimed, her pink lips forming into a sweet smile at his appearance. “I am truly happy to see you this evening. It was so very generous of your mother to invite us at such a late date.” Her smile widened and Edward saw that she was genuinely delighted to encounter his friend.

Frederick’s smile was no less telling. “Athena, the Conqueror, who has captured my heart,” he purred as he flirted shamelessly with the young woman. “Might I be so bold as to introduce to you my very good, but far less handsome, friend? Miss Lancaster, Mr. Gardiner. Edward, Miss Lancaster.”

Curtseys and bows were exchanged, along with the appropriate ‘how do you do’s.’ Miss Lancaster was indeed very elegant in her flowing white robes. She was of above average height and lithe, with long limbs and a pleasing figure. Her hair, or that of it which could be seen from beneath her helmet, shone a rich ebony, and her skin was fair and clear. The colour of her eyes was difficult to discern beneath the mask which all but covered them, but Edward fancied them light blue or grey. Although he had not yet seen all of Miss Lancaster’s visage, he found he approved of his friend’s choice, for Miss Lancaster seemed to be quite handsome indeed, with a pleasing manner.

The initial introduction having been made, Edward’s attention now turned to Miss Lancaster’s companion. She had been standing demurely behind her friend, almost as if reluctant to be seen, despite the flamboyance of her costume. The lady appeared to be young, perhaps twenty years of age, and was shorter than Miss Lancaster, perhaps a hair below the average height for a woman. She wore the stunning and elaborate garb of India, with bright yellow and orange silks and richly embroidered scarves in a swirl around her body. She was somewhat slight in stature, but round where a woman ought to be round and pleasing in appearance, and Edward found the need to prevent his eye from roving too freely over her costumed form.

Over her face she wore a three-quarter mask of unremarkable origin, though decorated in ribbons to match her clothing. Her head was covered with a fanciful turban, graced with jewels and beads and feathers. A few threads of flaxen hair showed from beneath the ornate head dress, curling prettily, and her features were obscured behind the decorated mask. Only her mouth and chin were visible, betraying her complexion to be fair and her lips light pink. Edward realized that those lips were very, very pretty when she smiled. There was something distracting and familiar about her, he mused. Perhaps he had met her before, at one of his mother’s parties, or perhaps seeking fabric in his shops. Or, perhaps, the very nature of her costume, with its swirls and wrappings of lush silks, brought to mind his own love of fine textiles and the pleasures of being surrounded by fine and beautiful bolts of fabric. He smiled.

A tale of love, secrets, and adventure across the ocean

When textile merchant Edward Gardiner rescues an injured youth, he has no notion that this simple act of kindness will change his life. The boy is bright and has a gift for numbers that soon makes him a valued assistant and part of the Gardiners’ business, but he also has secrets and a set of unusual acquaintances. When he introduces Edward to his sparkling and unconventional friend, Miss Grant, Edward finds himself falling in love.

But who is this enigmatic woman who so quickly finds her way to Edward’s heart? Do the deep secrets she refuses to reveal have anything to do with the appearance of a sinister stranger, or with the rumours of a missing heir to a northern estate? As danger mounts, Edward must find the answers in order to save the woman who has bewitched him . . . but the answers themselves may destroy all his hopes.

Set against the background of Jane Austen’s London, this Pride and Prejudice prequel casts us into the world of Elizabeth Bennet’s beloved Aunt and Uncle Gardiner. Their unlikely tale takes the reader from the woods of Derbyshire, to the ballrooms of London, to the shores of Nova Scotia. With so much at stake, can they find their Happily Ever After?

Riana Everly was born in South Africa, but has called Canada home since she was eight years old. She has a Master’s degree in Medieval Studies and is trained as a classical musician, specialising in Baroque and early Classical music. She first encountered Jane Austen when her father handed her a copy of Emma at age 11, and has never looked back.

Riana now lives in Toronto with her family. When she is not writing, she can often be found playing string quartets with friends, biking around the beautiful province of Ontario with her husband, trying to improve her photography, thinking about what to make for dinner, and, of course, reading!

Store-specific links for Amazon, are as follows:

Riana Everly is giving away five copies of the Ebook to blog readers through a random drawing on Rafflecopter. She will contact winners through the email address they provide to ascertain the appropriate format for the file. She will email the file directly to the winners.

Thank you, Riana, for visiting More Agreeably Engaged as part of your blog tour for The Assistant. Your post is such a neat post and I found it informative as well as entertaining. Your short excerpt has the desired effect of making the reader want more! I wish you the best with this latest release. Please come back anytime!
Posted by Janet T at 9:59 AM