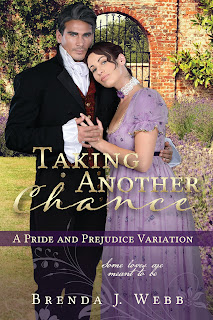 Brenda J. Webb is back at More Agreeably Engaged today, and is sharing an excerpt with us from her new release, Taking Another Chance. This sounds like such a good book, and it is on my TBR list. Readers, what do you think? Have any of you read Taking Another Chance yet?

Thanks for stopping by, Brenda, and sharing with us. My readers and I welcome you.

Janet, I am so proud to be visiting More Agreeably Engaged again to share an excerpt of my newest book TAKING ANOTHER CHANCE. I always enjoy visiting with your readers and I am giving away four Kindle E-book copies to those who comment and can accept books from Amazon.com.

As to this story, I have always wanted to write a tale where an older Darcy and Elizabeth find each other again and TAKING ANOTHER CHANCE is the result. The blurb which follows sets the stage for the story; however, for those who hate stories where Darcy is married to someone before Elizabeth, allow me to hint that the marriage began with deception and was of short duration.

Those who read my books know that I never have ODC in love with anyone but each other. After all, Some Loves Are Meant To Be!

Fitzwilliam Darcy and Elizabeth Bennet have suffered profound heartache in the fourteen years since parting in Lambton when word of Lydia’s folly reached her family.
At the age of forty, Darcy is now a widower raising a teenage daughter, whilst Elizabeth, a spinster, has spent the intervening years in service.
Unexpectedly thrown into each other’s company by circumstances not of their making, has time stood still when it comes to matters of the heart?
Can their timeless love survive the newest obstacles to happiness?

Once they were alone, Isabelle asked Richard about the governess, and he related all that Lady Gordon had said about Elizabeth’s abilities. He also explained that she had asked to begin her employment with them on Monday.

“You forgot to mention her name.”

Richard’s courtship of Isabelle began directly after William’s accident, so she was aware that her husband’s cousin was hurt in the service of a friend, whose sister, Lydia, had eloped with a cad who grew up at Pemberley—thus explaining William’s reason for getting involved in the matter.

“Bennet? Bennet? Where have I heard that name before?”

“I have met many Bennets in my lifetime, so I could not say. Rest assured, however, that this Bennet has been able to impress your mother in a short period of time, and that is no small feat.”

“According to your mother, Miss Bennet has breathed new life into our girls’ thirst for education.”

“I cannot fathom anything so grand, but I am willing to be proven wrong.”

“All I know is that our girls talked of nothing save their new governess on the way home. So much so, that Marianne asked them to find another subject.”

“Speaking of Marianne, I am pleased she agreed to come. I do not think I could stand another day of watching Marjorie sulk.”

Richard was relieved that Isabelle had changed the subject. “Then you will also be pleased to know that Darcy agreed to let her travel to Derbyshire with us and stay for several weeks.”

“It does please me, but I have to ask—what about the ball? If he does not attend, Amy will be devastated.”

“He agreed to attend the ball, but I feel I must warn you again that my cousin is not interested in your sister.”

“I know that Amy can be a bit giddy, but that can be reined in. Moreover, she is still young enough to give him an heir, and she is wealthy. What else could he ask for?”

“Darcy was never drawn to beauty alone; he values intelligence. Besides, he told me that he is not worried about producing an heir since Georgiana can inherit Pemberley.”

“Nonsense! Darcy is still young enough for children. He may be forty, but he does not look a day over thirty.”

“What about the silver in his hair?”

“It only serves to make him more devastatingly handsome.”

“If I did not know you so well, I believe I would be jealous of my cousin.”

Isabelle grabbed her husband’s hand, pulling him down beside her on the sofa. Framing Richard’s face with her hands, she kissed him soundly.

“I am not blind to Darcy’s attributes, but I only have eyes for you.”

A more passionate kiss followed before Richard pulled back. “You always know just what to say to make me love you even more, my sweet.”

“I am glad, for rest assured you are the love of my life, Richard Fitzwilliam.”

Consequently, the Matlocks were not in communication with the rest of the house until dinner was announced hours later.

Thank you, Brenda! It's so good to have you here again. I loved reading your delightful excerpt, and it was intriguing. You definitely have piqued my interest! I can't wait to have a little time so I can dive into Taking Another Chance. Thank you for sharing your stories with us. I loved reading your last two sentences in the intro to the post, "Those who read my books know that I never have ODC in love with anyone but each other. After all, Some Loves Are Meant To Be! "

It is giveaway time. Brenda has an impressive and generous giveaway. She is giving away 4 eBooks, and the giveaway is open to anyone who can accept eBooks from Amazon.com. Leave a comment to be entered in the giveaway. As always, be sure I can reach you should you be the winner. The giveaway ends the 13th of July at 11:59 P.M. Good luck to all.